Lateral boundary conditions define the way, the model behaves at its lateral boundaries. This is a very specific setting and you normally do not need to change these settings.
From Version 4 on, it is recomended to use at least the “Simple Forcing” option for temperature and humidity. This overcomes almost all problems that have been observed with the lateral boundaries in the former versions.

What Kind of LBCs are available in ENVI-met?

Three different kinds of LBC can be selected in ENVI-met:

You can choose the LBCs for temperature, humidity and for the turbulence variables. For the flow field, an open LBC will be used in a non-forced or “Simple-forced” configuration. If you use Forcing (either Simple Forcing or Full Forcing), the LBCs will be in any case “Forced” so that your pre-defined profils (temperature, humidity, wind,..) will be copied to the main model.

Which LBC is the best one?

The is no general clue, which LBC is the best for your case. Each LBC type represents some kind of situation in the model and you have to check which one is the most appropriate assumption for your case. At the end of this section you will find an illustrated example which might help you in your choice.

The forced LBC is the most stable condition because the mostly independent 1D model is used to obtain the boundary values which stabilises the 3D model. On the other hand, the 1D profile will have a significant effect on the data in the main model. If the 1D profile is not representative for your average conditions, this will cause a certain error. If you use the “Simple Forcing” option, a forced LBC will be applied for the temperature and the humidity. The values applied to the model border are taken from your given profile. If you use the “Full Forcing” mode, a forced LBC will be applied to all variables, that are actually forced in your configuration, including the wind.

Finally, the cyclic LBC assumes that the average conditions upstream of your model area (which produce the inflow profile) are similar to your model area. As the values of the outflow boundary are copied to the inflow boundary there is also a certain danger of undesired feedback inside the model which might cause numerical instabilities.

The following figures illustrate the effect of the three different possible boundary conditions using the turbulent exchange coefficient $K_m$ as an example. Although only showing $K_m$ here, the effects of the LBCs on the other variables such as temperature or humidity are basically the same as for the turbulent exchange.
For all figures, the simulation settings are exactly the same, except the LBC type for the turbulence model which was changed.
The wind comes with 3 m/s in 10 m a.g. from the east (right side of the figure). The model constellation consists of a simple 20 m high building with a moderate dense tree in front. The isolines are only plotted up to a $K_m$ value of 10 m²/s, the isoline distance is 0.3 m²/s. 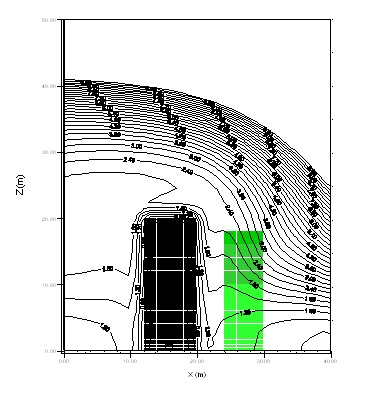 The first figure shows the profile for the “forced” or “closed” LBC, which means that the vertical profile of the kinetic energy and its dissipation rate calculated in the 1D model is copied directly to the right model inflow boundary. As it can be seen, the vertical $K_m$ profile of the 1D model looks significantly different to the average $K_m$ distribution in the 3D model. In the 3D model, the forced upward and downward flow reduces the diffusive mixing in the air and therefore modifies the Km profile leading to a zone of more or less height independent $K_m$ values especially in the lee of the building. In contrast, the undisturbed $K_m$ profil from the 1D model follows more or less the boundary layer approximation of

where $\kappa$ is the von-Karman constant (=0.4) and $z$ is the height in meter above ground.
If this model area would represent a building placed on a flat plane with nothing around, this inflow profile might be accurate. But if the model domain is neighbored by similar building structures, the profile of the incoming air is probably more like the profile at the outflow boundary.

The next figure shows the effect of the “open” LBC on the Km distribution. Open LBC means, that the values of the inner points are copied back to the lateral inflow boundary. 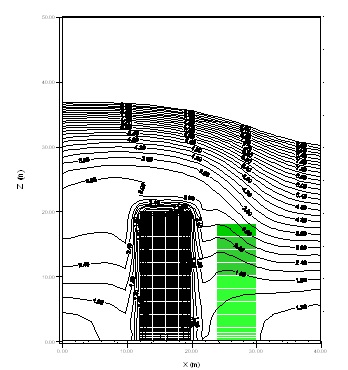 Obviously the profile at the inflow boundary is now more similar to the distribution inside the model area. The “squeezing” effect at the inflow boundary has been reduced. The use of this LBC would represent a situation where the neighbourhood of the simulation area has a similar structure to the simulation area but is not very close so that the vertical profile of the turbulence (and of other variables) can recover to some extend.

Finally, we have a look at the effects of the “cyclic” LBC, which means that the values from the outflow boundary (left) are copied to the inflow boundary (right) 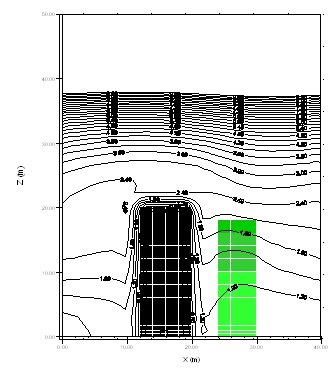 Now the inflow profile is similar to the average Km distribution inside the main model. This would represent a situation where the neighbourhood has in average the same structure as the model area and, in addition and in contrast to the example before, is so close that the modified profile is not recovering before entering the model area.

← go back to Knowledge Base Index
See also: ()